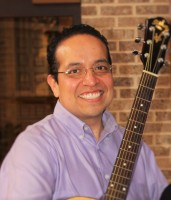 Steven Rendon’s passion and enthusiasm for music ministry and serving others was enkindled by his devoted Catholic mother at a very young age. However, his formal ministry would not begin until college when he joined a youth choir, and met a strong Catholic influence. She became a second mom and spiritual director for him. Steven realized that ministry is more of a way of life and a path to help others on their faith journey. He is grateful to share this journey with his wife, Jessica.

In college, Steven received honors in academics and music, such as Academic All-American, the United States Congressional Letter of Recognition for his performance in the Broadway musical “Dreamgirls“, and from the New Mexico State Senate. Through Eastern New Mexico University, Steven was able to put his interest in Music Technology into practice through recording and producing various ensemble performances throughout the United States and Europe.

In his early music career, Steven was the saxophone player for an award-winning Funk Band in Lubbock, Texas. After entering college, he began to take voice lessons and focused on developing his tenor voice. He has had the blessing of working with many gifted vocal instructors and opportunities to perform the roles of “Jimmy ‘Thunder’ Early” in  the Broadway musical “Dreamgirls” and “Poo-Bah” in Gilbert and Sullivan’s operetta “The Mikado“.

Steven currently works as a Project Manager for OMG home renovation company in San Antonio, Texas. Also working at the parish level, Steven is able to encounter opportunities to serve the community in many different ways. He is grateful to be the Young Adult Ensemble Director for St. Matthew, which is an auditioned group of musicians who provide sacred and contemporary music for Mass, praise and worship nights, retreats, and other Eucharistic centered events. Having over fifteen years of experience as a Liturgical Ensemble Director, he has launched a mission to produce quality music and musicians within the Catholic Church.

Finding joy in all aspects of Pastoral Music Ministry, Steven answers the call to various parish needs from setting up new sound systems to coordinating Holy Hours for the faithful. He is blessed to be a Sacristan, a Eucharistic Minister and has achieved Level 1 Catechist Certification. Steven seeks to expand his music ministry to serve God by reaching more people and helping them develop their talents and establishing a network to encourage others to do the same. Have a question or comment for Steven? Click here to leave him a message.

2 thoughts on “About Steven”

Steven and Jessica Rendon – 2 Musicians who love God & each other.

San Antonio, Texas
FaithRendered@gmail.com
May the Holy Spirit be with you always. Thank you for visiting our site!
Loading Comments...